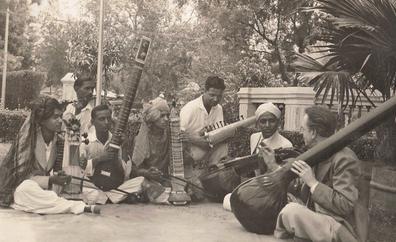 Imagined Journeys: Lalla Roukh and Her Story - A Conversation with Nirupama Rao, former Ambassador of India to the United States- 5/3/15 @4pm

A Special Book Launch Concert  for Resonances of the Raj

I'm delighted to announce that we will present a special concert to celebrate the publication of my book!  The program will feature music by Edward Elgar, Gustav Holst, John Foulds, Kaikhosru Sorabji, Liza Lehmann and Amy Woodforde-Finden.

New books will be available to purchase at the author price of $30, which is a 40% discount on the OUP list price (cash or checks only please)!

There will be an exciting line-up of leading Bay Area ensembles, soloists, and Mills music alumnae in this fascinating program of innovative compositions which reveal a rich history of cross-cultural musical exchange between India and Britain during the first half of the twentieth century, including historical recreations and several US premieres.

The Friction Quartet will play the US premiere of John Foulds' poignant last string quartet movement, Lento Quieto, written in Panjab, India, in 1935.

Choral Hymns from the Rig Veda. Under their Artistic Director, Paul Flight, they will be joined by Jessica Schaeffer on harp, and Charles Lloyd on tanpura, members of the Friction Quartet, and Esther Lakhani on piano in a performance of To Varuna and Hymn of the Travellers for women’s voices; Hymn to Manas for unaccompanied male chorus with Raymond Martinez, baritone; and the dramatic Hymn To the Unknown God.

Maya Kherani, coloratura soprano, with Kris Palmer on flute and Nalini Ghuman on piano, will perform The Snake Charmer, a poem by Sarojini Naidu set to music by Liza Lehmann.

Pianists Nalini Ghuman and Esther Lakhani will give the US premieres of excerpts from two modernist masterpieces, John Foulds’s Essays in the Modes, and Kaikhosru Sorabji’s Opus Clavicembalisticum.